Half of the world

Welcome to Isfahan, one of the amazing cultural cities in Iran. During its golden period in the 17th century, Isfahan was considered bigger than London, more cosmopolitan than Paris, and grander than the fabled Istanbul. Known as the city of turquoise Domes for its beautiful mosques, which sparkled like gems along the Silk roads, Isfahan was where Islamic architecture achieved excellence and influenced the design of mosque throughout Asia.

Isfahan is a historic city in central Iran. This city is the center of Isfahan province and also Isfahan city. Isfahan is Iran’s third-largest city and the third most populous city after Tehran and Mashhad and is one hundred and sixty-fifth the most populous city in the world and the ninth most populous city in West Asia. Isfahan metropolis is also the 18th most populous metropolis in the Middle East. There are numerous monuments in the city, some of them are registered as UNESCO’s heritage sites. The city is renowned for its beautiful Islamic architecture, covered bridges, mosques, and unique minarets. This has earned it the title of Isfahan “Half of the World” in common culture. In December 2015, along with Rasht as the first Iranian cities, the city joined UNESCO’s Worldwide Creative Cities Network. Based on UNESCO standards, a creative city, a city that harnesses the innovation and capabilities of citizens in sustainable urban development.

The holy savior cathedral also known as the church of saintly sisters, is a cathedral located in the New Jolfa District of Isfahan, Iran. It is commonly referred to as the Vank which means “Monastery or convent” in the American language.

The construction is believed to have begun in 1606 and completed with major alterations to design between 1655 and 1664 under the supervision of archbishop of David. The cathedral consists of a domed sanctuary, much like Iranian mosque, but with a significant addition of semi-octagonal apse and raised chancel, usually seen in western churches. 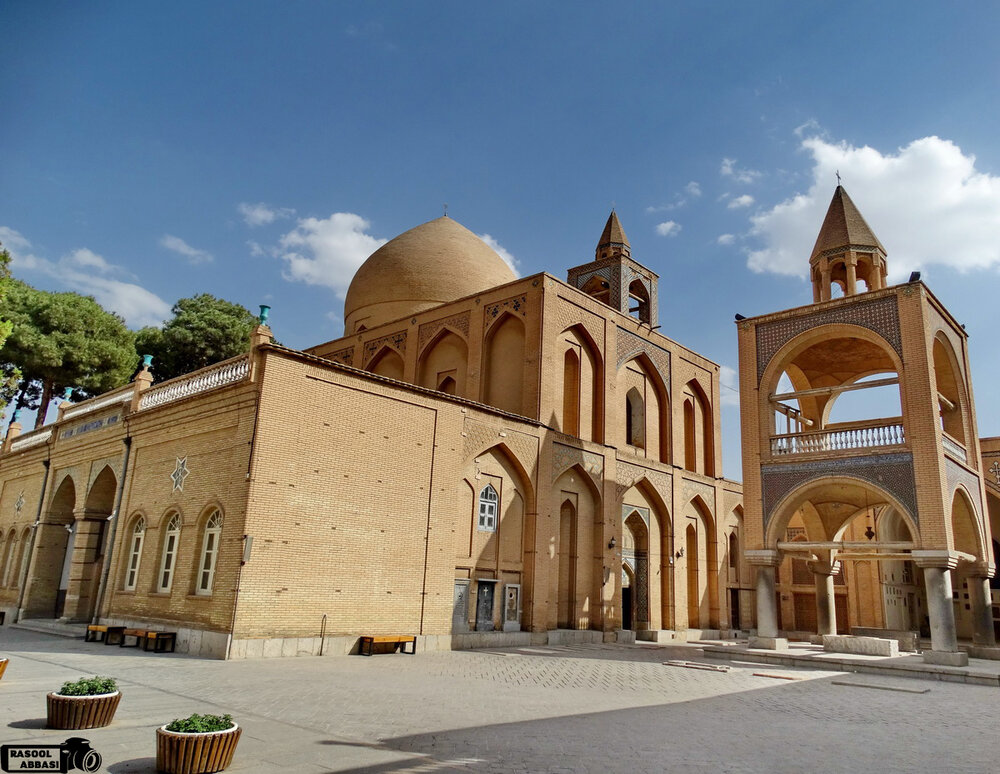 In 1598, when Shah Abbas decided to move his capital from the northwestern city of Qazvin to the central city of Isfahan, he initiated what would become one of the greatest programs in Persian history; the complete remaking of the city. By choosing the central city of Isfahan, fertilized by the Zāyande Roud (“The life-giving river”), lying as an oasis of intense cultivation in the midst of a vast area of ​​arid landscape, he distanced his capital from any future assaults by the Ottomans, arch-rival of the Safavids, and the Uzbeks, and at the same time gained greater control over the Persian Gulf, which had recently become an important trading route for the Dutch and British East India Companies.

The chief architect of this colossal urban planning task was Shaykh Bahai (Baha ‘ad-Din al-`Amili), who focused on two key features of Shah Abbas’s master plan: The Chahar Bagh avenue flanked at either side by side with all the prominent institutions of the city, such as the residences of all foreign dignitaries, and the Naqsh-e Jahan Square (“Exemplar of the World”).  Prior to Shah’s ascent to power, Persia had a decentralized power structure, with various institutions battling for power, including both the military (the Qizilbash) and the governors of the various provinces making up the empire. Shah Abbas wanted to undermine this political structure, and the recreation of Isfahan, as a Grand Capital of Persia, was an important step in centralizing powerThe ingenuity of the square, or Maidān, was that, by building it, Shah Abbas would gather the three main components of power in Persia in his own backyard; the power of the clergy, represented by Masjed-e Shah, the power of merchants, represented by the Imperial Bazaar, and of course, the power of the Shah himself, residing in the Ali Qapu Palace.